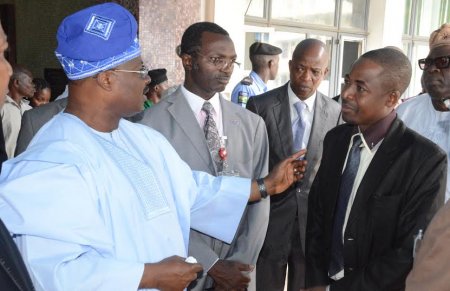 Oyo State Governor, Senator Abiola Ajimobi has offered to cater for the medical expenses of surviving students of Kano state who died in an auto crash in Ibadan while journeying from Lagos after a quiz competition.

In a report filed by The Vendor, it was learnt that the accident occurred ‎on Tuesdaywhile 16 students and their teachers were returning to Kano after representing the state in a quiz competition in Lagos.

Seven of the students were said to have died on the spot, while one out of the nine earlier rescued died few hours after arriving at the University College Hospital, Ibadan.

Governor Abiola Ajimobi ‎offered to foot the bills of the 8 survivors who are receiving treatment at the accident and emergency ward of the University College Hospital, Ibadan until they are discharged from the hospital.

Ajimobi, while condoling with his Kano State counterpart, Dr Abdullahi Umar Ganduje‎, described the accident, which also reportedly claimed the life of the driver of the bus, as “highly depressing to him and the people of the state.

“This is most unfortunate and depressing to me and the good people of Oyo State. My heartfelt sympathy goes to the governor of Kano State, parents and the loved ones‎ of the dead students and other victims. May their gentle souls rest in perfect peace.

“They are children and we all have children. So, we have to come and empathize with them. I want to use this opportunity to announce that we will settle the bills and take adequate care of the surviving ones.

“I have spoken with my dear brother, the governor of Kano state. He is a friend and a brother, because we are all Nigerians. I have assured him to be rest assured that the surviving victims will get the best medical attention here at the UCH.”

The CMD of the UCH had said that six of the surviving students and a teacher who were in a stable condition would require further examination and surgeries.