Babatunde Ibrahim, twenty-eight years old suspect was arrested by operatives of Rapid Response Squad, RRS, in Lagos, where he confessed that he had stolen over hundred mobile phones, adding that stealing had become part of him since childhood.

Ibrahim, who was nabbed in Ikeja, where he told the RRS team that he derives pleasure from the act.

He told the RRS’ headquarters, while mentioning Sanni Azeez, 27, and Hakeem Kamoru,40, who live at Akala Street in Mushin, were receivers of the stolen items.

The RRS, Commander, Olatunji Disu, said his men gave Ibrahim a chase after noticing that his movement was suspicious, adding that he was arrested when he could not give satisfactory answers to questions they asked him. 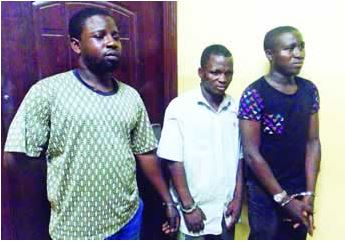 The Lagos State Police Public Relations Officer, SP Dolapo Badmos, said the suspect would be charged to court after the conclusion of investigation.