Samuel Ilori is a Lagos-based lawyer who has threatened to sue Temitope Balogun Joshua (famously known as T.B. Joshua), founder/General Overseer of the Synagogue Church of All Nations, over the recent collapse of his church's guesthouse.

Mr. Ilori has said that his group, Vote for Service Initiative, would take up the case against TB Joshua if the Lagos State Government continues to dillydally.

Premium Times has this story:

“I started the campaign from last week that T.B Joshua must be brought to book, that justice must be done over the case,” said Mr. Ilori, a Corporate and Property Consultant.

“What we are asking for is that government should do the needful. I believe they have concluded their investigation, as far as evacuation is concerned evacuation has been done. Everything that needed to be done, I believe has been done,” Mr. Ilori added. 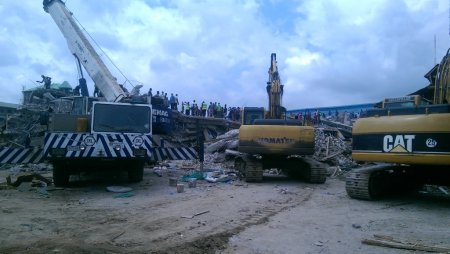