Saidat Sanni, a 22-year-old female student from the Department of Statistics had emerged the overall best student of the Ladoke Akintola University of Technology (LAUTECH), Ogbomoso.

Prof. Adeniyi Gbadegesin, the Vice-Chancellor of the institution, announced Sanni as the overall best at its 13th Convocation held in Ogbomoso on Friday.

Sanni, who hailed from Abeokuta in Ogun State, emerged after securing a Cumulative Grade Point Average (CGPA) of 4.88 to overrun Olufemi Ige of the Mathematics department, who secured a CGPA of 4.85 in the 2013/2014 session. 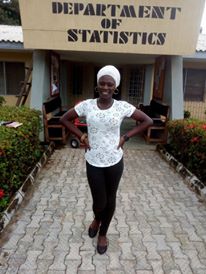 Photo: Saidat at the dept of Statistics

In her valedictory speech, Sanni urged other graduands not to relent in the spirit of excellence, integrity and service, which had been their watchword in school.

“We are here, we made it and we did it. Nothing good comes easy.

“More challenges will come our ways, however, with endurance, perseverance, commitment, patience, hard work and steadfastness in prayers, we shall make it,’’ she said.