Six people died in a ghastly auto accident which occurred in the early hours of Tuesday on the Lokoja-Abuja road.

Ten other people were seriously injured in the accident, which occurred at about 4:a.m., at a bend at Ohono village located on the ever busy road, FRSC said.

The Sector Commander of the FRSC in Kogi, Mr Ogochukwu Ugboma, who confirmed the incident, said a truck carrying cement belonging to Dangote Cement Company and a J5 bus were involved. 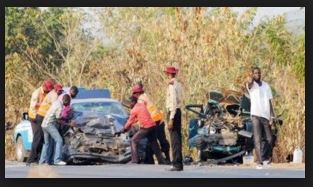 He said that traffic control was ongoing at the bend to avoid disruption to vehicular movement, adding that four other persons escaped unhurt in the accident.

Ugboma said the accident may have been caused by hazy weather and the state of the road. Those injured, he said, were taken to the Federal Medical Centre in Lokoja for treatment while the corpses were deposited at the morgue of the hospital.