Curators
It was a bad day yesterday for two newly sworn in corps members who were caught in the act in Plateau State NYSC camp. 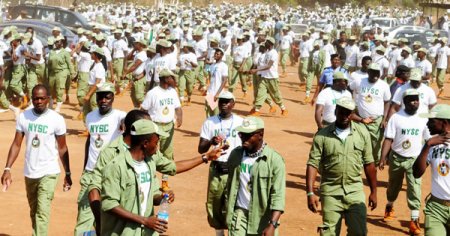 According to an exclusive source who sent the news to GistReel.Com, the corps members who are of the recently mobilised Batch A Stream 1 were caught having sex inside a gutter in the wee hours of yesterday.

They were caught in the act after lights out by parading soldiers.

The male corps member blamed the devil for the act while the Female who happens to be married blamed the weather conditions in Plateau State and stated that she can’t stay too long away from sex.

Gistreel.com reports that the two corps members have been decamped in accordance with the NYSC law.
E

Body no be firewood
A

Hahaha no be small thing ooo watin the husband goo do? Honestly here I believe that body no bi wood.........chai I tire ooo for the laugh

Bad for them. I served in the same camp. The cold could be killing but that's quite shameful for them. Especially for the married woman.

Even dogs sometimes have restrains. May God help you that you will not loose your marriage. We humans are aways ready to shift blame on others instead of accepting our failures and look for solution