An unidentified man has committed suicide by jumping into a canal at Cele Bus Stop area of Lagos, Southwest Nigeria.

The man was brought out of the canal dead, says the Lagos State Fire Service Director, Rasak Fadipe. 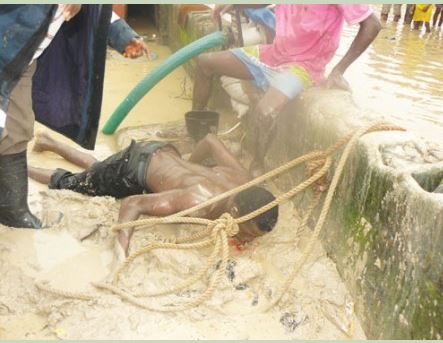 The tragedy occurred on Friday afternoon at Cele Bus Stop, on Oshodi-Mile 2 Expressway.

According to Fadipe, information gathered from the scene of the tragedy had it that the man was just walking along the road when he suddenly pulled off his shoes and jumped into the canal.

Oct 21, 2017
ProfRem
P
A
Metro I Am Not The Orji Who Jumped Into Lagos Lagoon - Port Harcourt Based Nurse Disowns Viral Photo