Curators
The suspected mastermind of the 2010 Independence Day bombings, Charles Okah,did not escape from Kuje Prison in Abuja, the Nigerian Prisons Service has told Premium Times. 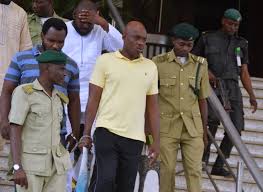 “It is not true (that he escaped),” the spokesperson for the Nigerian Prisons Service, Francis Enobore, told Premium Times, in response to reports that Mr. Okah scaled the prison’s wall and fled on Friday night.

“He is there (Kuje prison) hale and hearty. The comptroller of prisons in charge of the FCT was there less than 30 minutes ago and he saw him there. I spoke to the controller.”

Mr. Enobore however admitted that there was an “incident” at the prison on Friday night.

“Yes there was an incident yesterday, but Henry Okah was not involved,” he said. The Comptoller prisons has ordered an investigation and that is going on. We want to know if anybody escaped and if yes, what are their identities.”

Mr. Enobore promised to provide updates once the preliminary investigation is ready.”