Former President Olusegun Obasanjo appears to have given his nod to the rumoured presidential ambition of the Speaker of the House of Representatives, Hon. Aminu Waziri Tambuwal, ahead of the 2015 election.

Tambuwal is believed to be nursing a yet-to-be -declared presidential ambition, which could see him challenge President Good;luck Jonathan in 2015.

The Speaker had flagged off consultations in recent months and had met leaders, including Obasanjo, and former military president, General Ibrahim Babangida. 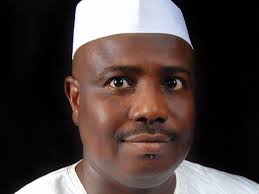 A
Politics Tambuwal: Patience Jonathan Insulted Me On Phone, Says 'You This Hausa Boy'