The Minister of Youths and Sports, Solomon Dalong, on Tuesday blamed Nigerian youth for aiding and abetting corruption.

Mr. Dalong said the youth submit themselves to people with questionable wealth, most especially those in government.

He charged the youths to play key roles in the fight against corruption rather than submitting themselves to people with questionable characters.

Speaking at the opening session of a two-day National Conference on Youths Against Corruption organised by the Independent Corrupt Practices and other Related Offences Commission, ICPC, the minister urged them to declare war against corruption in all ramifications. 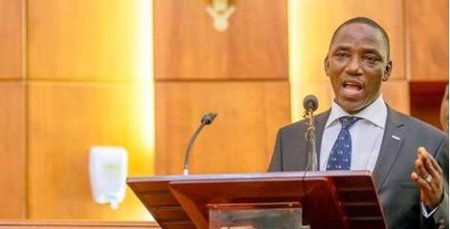 He recalled his days in the leadership of the National Association of Nigerian Students, NANS, when students rejected a parcel of land in a choice area of Abuja to prove they could not be corrupted.

Also speaking, the Comptroller General of the Nigeria Customs Service, Hameed Ali, told students to take possession of the fight against corruption as they had always been the victim of the vices of corruption at all times.

Nov 8, 2019
ese
E
E
Politics Lai: This government has sent corruption under the carpet - The Cable