Curators
In a rare display of sportsmanship, Ifeanyi Ararume, governorship candidate of the All Progressives Grand Alliance (APGA) and Uche Nwosu, candidate of Action Alliance (AA) joined Hope Uzodinma to pick his certificate of return at the Independent National Electoral Commission (INEC) office in Abuja on Wednesday.

On Tuesday, the supreme court had sacked Emeka Ihedioha as governor of Imo and ordered INEC to return Uzondinma, candidate of the All Progressives Congress (APC) as the elected governor of the state.

INEC had declared Ihedioha winner of the March 2019 election, and both Nwosu and Ararume came second and third respectively, leaving Uzodinma in a distant fourth.

Uzodinma, however, challenged Ihedioha’s victory up to the apex court. 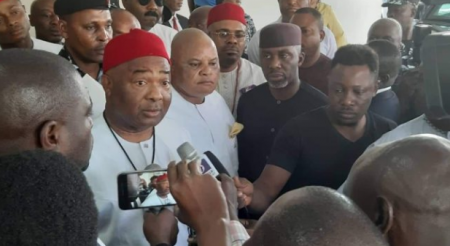