Curators
Cristiano Ronaldo starred for Portugal as they knocked out Wales with a 2-0 victory to reach the final of Euro 2016. 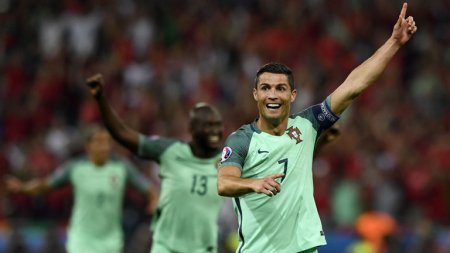 The Real Madrid forward turned home a header to break the deadlock and score his ninth goal for the Seleccao.

The pre-match talk had centred on Ronaldo's showdown with Real Madrid team-mate Gareth Bale and it was the Portuguese who shone as his side took another step towards assuaging the pain of their defeat in the 2004 final.

Ronaldo leapt imperiously to head in a 50th-minute and had the shot that Nani steered home to extend Portugal's advantage just three minutes later.

That quickfire double brought to life a semi-final that had until then been a largely cagey affair for Portugal.