President Muhammadu Buhari has once again throw his back against the devaluation of Nigeria's currency.

Buhari insisted that he is yet to be convinced that the vast majority of ordinary Nigerians will derive any tangible benefit from naira devaluation.

Presidential spokesman Femi Adesina quoted Buhari as insisting on Friday at the Aso Rock Presidential Villa in Abuja while meeting with members of the Council of Retired Federal Permanent Secretaries.

According to Adesia, Buhari said: "When I was military Head of State, the IMF and the World Bank wanted us devalue the Naira and remove petrol subsidy but I stood my grounds for the good of Nigeria. 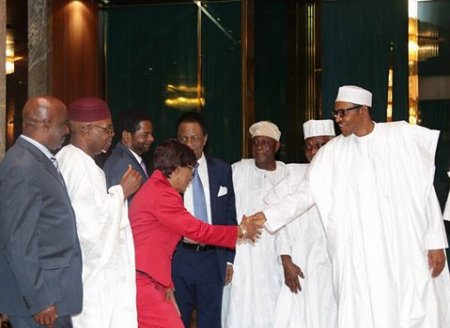 "The Naira remained strong against the Dollar and other foreign currencies until I was removed from office in August, 1985 and it was devalued. But how many factories were built and how many jobs were created by the devaluation?”

"That is why I am still asking to be convinced today on the benefits of devaluation," the president told the retired Permanent Secretaries led by Otunba Christopher Tugbobo.

Politics Why I am a Buharist: Femi Adesina – P.M. News