Officials of the Independent National Electoral Commission (INEC) on Tuesday stormed the National Assembly complex to formally notify Senator Dino Melaye of a recall petition against him.

However, drama ensued as they attempted to perform their function amid a seeming hide and seek between the embattled Senator and the INEC officials. Melaye, who seemed to have gotten wind of the plans by INEC to serve him notice of his recall literally abandoned his office at the second floor of the new wing of Senate to avoid taking receipt of the documents.

According to Dailytimes, when INEC officials could not locate him in the office, they made efforts to ambush him at the plenary but again could not track down the Senator who took a back door at the plenary to escape. 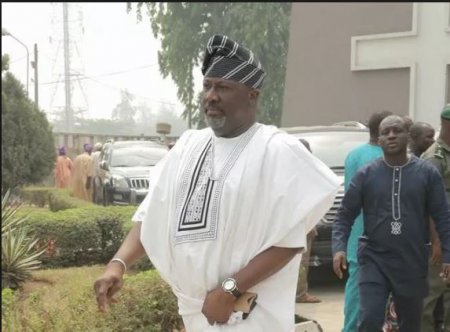 INEC recently resumed the recall process after a court ruled against the senator who tried to stop the recall. Melaye, representing Kogi West Senatorial District, is facing a recall by his constituents who in a petition on June 23 called on INEC to recall him.

Melaye had on Monday addressed the media averring that the “purported’’ petition from INEC amounted to breach of the 1999 Constitution (amended).

Politics I will only act in movies to correct societal ills – Sen. Dino – Vanguard News