Rescuers have found the bodies of more than 100 people killed after an apartment block in Taiwan collapsed during an earthquake one week ago, emergency services said on Saturday.

Only three residents of the Wei-kuan complex in the southern city of Tainan remained unaccounted for as emergency services drew close to completing their search, after rescuing hundreds of people from the ruins. 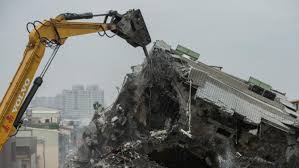 The death toll now stands at 114 with 550 injured, according to the latest count from the National Fire Agency.