The first healthy volunteer has received an experimental Ebola vaccine in Oxford. Ruth Atkins, an NHS communications manager, is the first of 60 volunteers who will receive the jab in Oxford, with further trials due to begin in Africa next month

"I volunteered because the situation in West Africa is so tragic and I thought being part of this vaccination process was something small I could do to hopefully make a huge impact. " she said.

Normally it would take years of human trials before a completely new vaccine was approved for use but the urgency of the Ebola outbreak in West Africa is such that this experimental vaccine is being fast tracked at an astonishing rate.

If the trials are successful, it could be used to immunise health workers in affected areas by the end of the year.

By then, around 10,000 doses should be available, and will be used to protect health workers in the worst affected regions of West Africa, BBC reports.

The vaccine is being developed by GlaxoSmithKline and the US National Institutes of Health.

Funding for the trials is coming from the Wellcome Trust, Medical Research Council, and the UK Department for International Development. 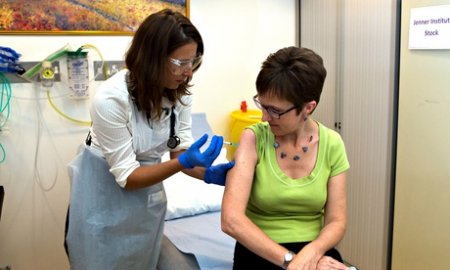 General Health Dentists say HPV vaccine is a ‘no brainer’ as cases of head, neck and mouth cancer on the rise – TheJournal.ie