A video has surfaced on the internet about an interview with a so-called “moderate” Muslim cleric,
Imam Mullah Krekar on a Norwegian TV show. The video has gone viral because it shows an Islamic leader in the West being honest about what Islam teaches when it comes to non-Muslims.

In response to questions about Muslim violence against non-Muslims, Mullah Krekar tells Norwegian TV that not only is it okay for Muslims to kill non-Muslims, it’s actually required by Qu’ranic law. Further the imam says that “Muslims have the right to Kill anyone who does not respect Islam.” 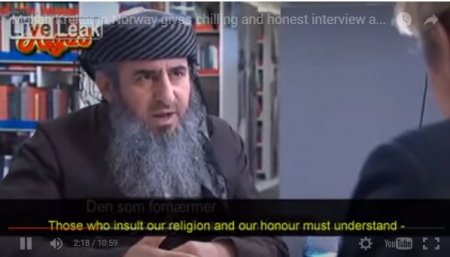 Curators
this is chilling and shows the dangers of religious brainwashing from all corners.

This is absurd! Where is it written in the Qur’an? Contrary to the believe of some Muslims who think beheading someone if they insult the Prophet Muhammad (S.A.W) is the right is also inappropriate, as the case or judgment of Blasphemy is in God's hands alone.
So what is this guy talking about?

Feb 15, 2017
abujagirl
A
L
Metro Emir Sanusi: Why Northern Nigeria Has Not Progressed Like the South