Cameroon's Ministry of Defense has reported that 300 Boko Haram fighters have surrendered in the last three weeks.

Lt. Col. Didier Badjeck has said the terrorists have shed their arms and have asked for asylum in the country. Their fate, as yet, remains undecided.

Boko Haram had seized a string of towns and declared an Islamic caliphate in a corner of northeast Nigeria before the setback suffered at Konduga.

The Nigerian Defense Ministry has said it has killed hundreds of insurgents recently in the country’s northeast. 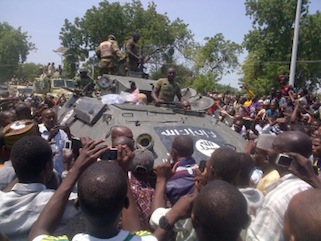