Ghanaian skipper Asamoah Gyan has alleged that he was racially abused in his club's Asian Champions League semi-final second leg game on Tuesday.

Gyan was shown a red card for a bad tackle on Salem Al-Dawsari in the game,and Pintilii rushed after him with both players having a go at each other.

"The player has no right to tell me what he did. He said something to me which made me upset.

However,Gyan admitted that he deserved to have been sent off in the match,acknowledging that he made a bad tackle.

"I must confess it was a harsh tackle. But in my mind I did not go for the player, I just went in strong for the ball," added Gyan. "I am a professional.

"The referee took his decision. It is football so I cannot complain. I lost my head a bit, but life goes on." 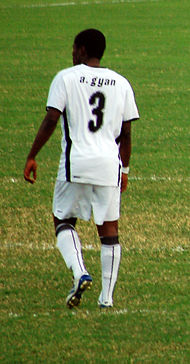