Dolphins player, Isiaka Olawale has expressed excitement after his side climbed to 15th position on the English Premier League table, but insists that his side still have more work to do.

"Not yet party time, but for now at least wear trying to be getting write but still have much to do because not yet over until it's over."

"Still remain 8 matches to go which I believe we still have much work to do."

The former Kwara United midfielder admits that the team still has a lot of work to do to achieve their aim of not going down at the end of the season since their original target of picking a continental ticket may seem unachievable at this point.

"So we approach each game as it come."
"But I believe which much hard working nd prayer we are going to escape it at the end of the day."

Olawale further reiterated that the club's management are yet to address their financial issues, which is inhumane for the players who are working hard to grind out results even in the face of hunger and hardship.

He also said explained that they (the players) will not allow the financial issue disturb but them but that the government must do their part by paying them their money.

"You know I told u the other time day that despite all what wear facing in time of financial crisis we still put that behind us nd face the job squarely with a lot of encouragement nd determination."

"But that doesn't stop us not to fight for our entitlement."

"I Must tell you that togetherness is really helping the team for now."

"Yes, we went to government house this morning at least to create awareness and the governor wasn't around, and we are still going back there before friday."

"Because we don't have much time again we need our money."Olawale told us in an interview 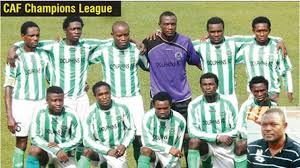