The Nigeria Labour Congress,NLC and its affiliate body, the Trade Union Congress,TUC, parley meeting with the federal government on Monday ended in a deadlock as labour unions vowed to press ahead with its industrial action, scheduled to commence tomorrow if the Federal Government fails to reverse to old pump price of petrol.

The governor of Edo State,Adams Oshiomhole, who was at the meeting to mediate between the two warring sides, opposed agitation for wage increment, saying it was not sustainable at the moment.

NLC president, Ayuba Waba and his TUC counterpart, Bobboi Kaigama, said there was the need for government to reverse to old pump price of fuel, given that the development was having a toll on the masses. 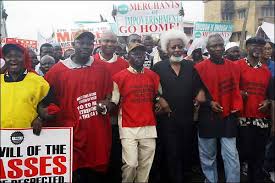 Meanwhile as both sides remained unyielding but have agreed to continue the parley meeting today at 3 pm.

It will be recall that the Nigeria labour congress has issued a four-day ultimatum to the federal government to reverse to old pump price, the ultimatum which will come to an end today.

If the Federal government and labour unions failed to common a ground today, the nation might be shut down tomorrow in mist of economic hardship and cash crush.