No fewer than 13 persons died on Sunday after a commercial bus en route from Enugu State had a head-on collision with a trailer at Ofeme Junction on Umuahia Road, Abia State. 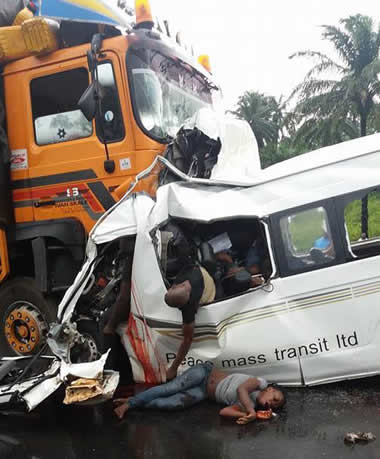 According to the PUNCH, two other passengers in the 18-seater bus belonging to Peace Mass Transit Limited with number plate, AKL895YY, reportedly sustained varying degrees of injuries in the accident that happened around 11am.

The trailer en route to Enugu State from Port Harcourt, River State, was said to be on top speed and lost control, veering into the path of the bus, which was a few kilometres away from its destination – Umuahia.

It was gathered that the trailer driver fled the scene immediately after the crash.

An eyewitness, who identified herself simply as Sharon, said some of the passengers were mangled in the bus while others were thrown on the road as crowd gathered to rescue the injured. She said she was in another bus travelling to Ebonyi State, adding that he counted eight lifeless bodies at the spot.

It was gathered that officials of the Federal Road Safety Corps later arrived at the scene to remove the remains of the deceased.