Sports Iheanacho not yet ready for Super Eagles, time's up for Obafemi Martins - Stephen Keshi

Stephen Keshi believes that Kelechi Iheanacho is not yet ready to play for the Super Eagles national team.

There has been a clamour for Iheanacho to be drafted into the Super Eagles team,considering that there is a lack of creativity in the side.

But Keshi is adamant that Iheanacho is not yet up to the task of what is required to be in the national team.

“Iheanacho is a good player but not for the Super Eagles now. He was in City’s preseason because they wanted to look at him and see if he has what they need”Keshi told footballive.com

Meanwhile,Keshi equally played down talks of recalling Obafemi Martins to the national team,adding that they need younger players than the Seattle Sounders forward.

“For Obafemi martins; it’s good to indicate that you want to play for your nation, as a football player yes of course but we have other players upfront there and you have to give the younger players the opportunity to grow and that is what we are doing” 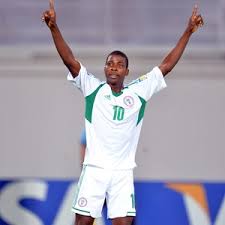