Politics Jammeh Dares Buhari And His Battalion, Vows To Remain in Power

Curators
President Yahya Jammeh on Thursday in Banjul reiterated his stand that he would not step down as Gambian leader when his mandate ends on Wednesday. 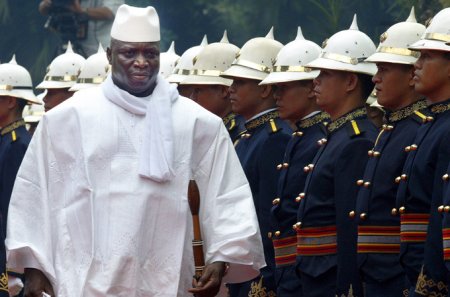 Despite reports that Nigerian President, Muhammadu Buhari has raised an army of 800 soldiers to invade Gambia should he not rescind power, the dictator has insisted on remaining in power.

The information ministry said in a statement read on national television that Jammeh was planning to remain in office until the Supreme Court decides on a petition he filed.

Earlier this week, Gambia’s dysfunctional Supreme Court adjourned hearing Jammeh’s petition to Monday, since only one of a required minimum of five judges were present.

Observers fear that delays to the planned hand-over of power could lead to violence as Gambia has been in a political lockdown since Jammeh refused to accept the result.

Meanwhile, some West African leaders, including Nigeria’s President Muhammadu Buhari, are expected to arrive in Gambia to convince Jammeh to respect the constitution and hand over the presidency.

Jun 23, 2022
ese
E
K
Politics ”It is absolutely clear to me that the perception that we had in the pastÂ is clearly wrong”- FFK speaks about President Buhari and the APC after.....