Residents of Sierra Leone’s capital have celebrated the end of an Ebola epidemic that has killed almost 4,000 people since it began last year.

In a party-like atmosphere, thousands of people danced in the streets of Freetown to mark the occasion. 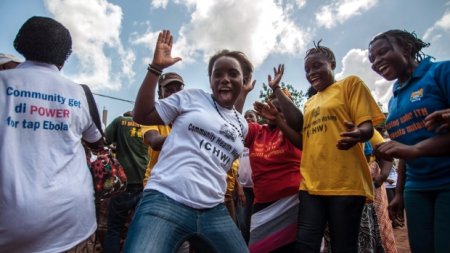 Earlier, thousands of people gathered overnight around the Cotton Tree, a massive tree in the centre of the capital for a candlelit vigil organised by women’s groups to pay tribute to health workers who lost their lives.

“They died so we could live,” university student Fatmata told the Reuters news agency, with tears in her eyes. Many of the 220 health workers who died were infected due to inadequate protective equipment and training.

The country’s first confirmed Ebola survivor, Victoria Yillia, told the crowd she was “happy that this disease which almost killed me has finally ended”.

She appealed to authorities not to forget survivors, many of whom have faced social stigma and persistent health problems.

Elsewhere in the city, residents celebrated the end of the epidemic, which forced schools to close, overwhelmed healthcare systems, and hurt the local economy.