Curators
Former Flying Eagles coach, Ladan Bosso has backed the high flying Golden Eaglets to beat Mexico in the semi finals of the ongoing FIFA U17 world cup in Chile.

Nigeria defeated Brazil 3-0 to progress to the semi final stage while their Mexican counterparts ousted Croatia in the quarter final stage to set up a re-match with the defending champions.

Bosso said Golden Eaglets were splendid in their two games and are hot favorites to book a final ticket. However, he warned that Amuneke’s boys should maintain tactical discipline for the remaining part of the competition if they hope to defend their title.

“I want to assure you that the Eaglets will beat Mexico and also win the U17 World Cup again. They have played with so much enthusiasm and discipline and if they maintain same till the end of the competition, it will be hard for any of the remaining teams to beat them,” Bosso told Goal.

“I also want to hail the impact of the highest scorer, Victor Osimhen. He has been remarkable in Chile and I tip him to lead Nigeria to the title.”

The game billed for the Estadio Francisco Sanchez Rumoroso, Coquimbo will be the third meeting both teams will be facing in the history of this competition. Manu Garba’s boys defeated the Mexicans 6-1 and 3-0 respectively in the 2013 edition staged in the United Arab Emirates. 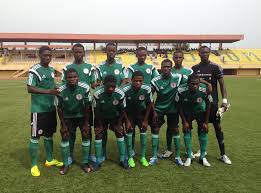 E
Sports 2019 U-17 AFCON qualifier: Golden Eaglets to get gifts if they beat Niger in semi-final – pulse.ng