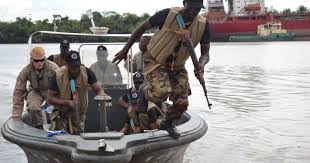 The kingpin, who was arrested by troops of ODS after months of being on the wanted list of security agencies in the Niger Delta region, was said to be the leader of a gang of militants, who serially attacked pipelines in Delta and Bayelsa states.

Confirming the development at the weekend, the Commander, ODS, Rear Admiral Suleiman Apochi, said the hoodlum was arrested at his hideout along Captain Ayeni Road, Kpansia, Yenagoa, Bayelsa State, alongside three other suspects.

Narrating how the troops apprehended the suspected kingpin, he said: “After gathering actionable intelligence, troops carried out surgical military operations at his hideout at Captain Ayeni Road, Kpansia Yenagoa.

“He was arrested with three other suspects. Items recovered from his hideout include seven mobiles phones, 15 identity cards, one First Bank ATM card and a jack knife. Suspects are being interrogated for further actions”.

Apochi explained that the suspect and his gang at various times masterminded the destruction of oil facilities to sabotage the operations of oil companies and the economy.

He said the suspect, who already confessed to some of the criminal activities, also engaged in the abduction of high-profile individuals in the region.

I, persobally, do not know when this will come to an end. You keep arresting, they continue to sabotage the nation's only stream of wealth and yet, telling on government revenue.

Why cant we seek another approach?