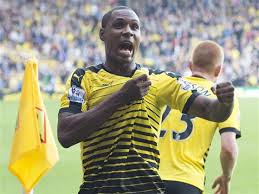 The Watford striker has since mourned his late father on instagram as he posted a black blank picture with the caption: ‘R.I.P Daddy’.

The senior Ighalo was said to have been slightly under the weather before giving up the ghost on Monday morning.

The 26-year old had always attributed his success on the pitch to God and his family, which he has maintained has been his driving force.