A couple, Chioma and Innocent Anozie, have been arrested in Ogun State for allegedly torturing an 11-year-old girl, Oluchi, in Ebute, Ibafo, Ogun State.

According to reports, the child was beaten with ropes, starved and locked up in the toilet for two days for wanting to play with other children in the neighborhood.

The primary four pupil started living with the couple about four years ago when she was brought from her hometown in Owerri, Imo State. However, she was said to have been subjected to different forms of inhuman treatment by the childless couple.

When interrogated, Oluchi said: "When I was brought from the village four years ago, she said I would be cleaning the house and washing clothes and dishes. I am supposed to be in Junior Secondary School 2, but she put me in primary 4.

She stopped me from going out. She said all the people in this house are criminals and they can use me for money ritual. She always beats me with ropes and cables. I have been inside the toilet since Thursday.

She locked me up because I went to take a story book in her room. She said I was lying and that I actually went to look for keys to open the door and go out. She used celotape to seal my mouth and chained my legs.

She flogged me with ropes and a stick. She said I would serve 21 punishments. I only took garri on Thursday morning.”

Residents confirmed the abuse on Chioma saying she was tortured at every offence. 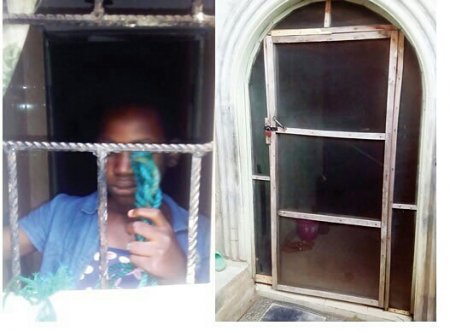