“In Imo state, there is hope. Hope, hope, hope in Imo state! A new leadership that will break barriers and there would be joy in the land of Imo. Lift your candles as I bless Hope Uzodinma; and I empower him to, spiritually, to take over. How, I do not know,” Ejike Mbaka, a Catholic priest in Enugu diocese, prophesied Hope Uzodinma’s ”victory” at the supreme court about two weeks ago.

A lot of people had dismissed the prophecy but on Tuesday the supreme court declared Uzodinma, former senator representing Imo west, as the duly elected governor of Imo state — to the surprise of many.

The court held that results from 388 polling units “were wrongly excluded from scores ascribed to them (Uzodinma and APC)” adding that “the first appellant (Uzodinma) holds the majority of lawful votes cast.”

However, the road leading to Uzodinma’s victory at the apex court was long and rough. There was a fierce struggle before he was able to pick the governorship ticket of the All Progressives Congress (APC).

Rochas Okorocha, immediate past governor of Imo, had wanted to install Uche Nwosu, his son-in-law, as successor, but this led to a rancour in the party at the state level. 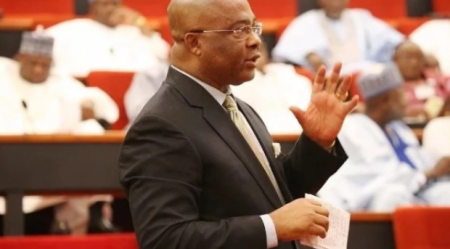 Jul 20, 2022
Kayode Israel
K
E
Politics APC on Uzodinma’s victory: We are confident other stolen mandates will be restored - The Cable