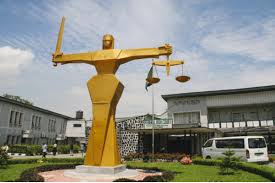 The accused — Oluwabunkenoye, 24, and Abiola, 29 — whose addresses are unknown, are facing a two-count charge of same-sex, having sexual intercourse and fighting in the public.

The duo, however, pleaded not guilty to the charges.

The Police Prosecutor, Sgt. Anthonia Osayande told the court that the accused with others still at large committed the offences at City Centre Hotel at Ijeshatedo in Surulere about 3.00.p.m. on June 1.

“He promised to pay some money if he consented to the act, but the accused refused to pay after enjoying himself.”’

He noted that the offences contravened Sections 54 and 136 of the Criminal Law of Lagos State 2015 (Revised). The Chief Magistrate, Mrs. Ipaye Nwachukwu, granted bail to the accused in the sum of N100,000 each with two sureties each in like sum.

She ordered that the accused should submit their passport-size photographs to the court registrar. Nwachukwu said one of the sureties must be a blood relation of the accused, while the other must be a cleric or a community leader. In addition, the sureties should provide evidence of tax payment to the government.

She adjourned the case until Aug. 3 for mention.
E

Evil has crept into African culture. The judge should remember it is 14 years imprisonment with option for fine
C

France1234 said:
Evil has crept into African culture. The judge should remember it is 14 years imprisonment with option for fine
Click to expand...

You are right
U