The United States on Wednesday transferred two Yemeni men who had been imprisoned at Guantánamo Bay, Cuba, for nearly 14 years to Ghana , the Pentagon said.

The transfer marked the start of what is expected to be a flurry of 17 departures in early 2016.

The Pentagon said Khalid al-Dhuby had been approved for release since 2006 and Mahmoud Omar Bin Atef since 2009. 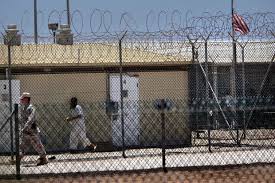 Both have been held for more than a decade and have never been charged.

Ghana has given permission for the men to stay for two years subject to security clearances, Foreign Minister Hanna Tetteh said.

The West African nation has not previously taken any Guantanamo prisoners.

The jail was set up following the 11 September 2001 attacks in the US to detain what Washington called "enemy combatants".

US President Barack Obama has said he wants to close the jail down before he leaves office in 2017.

Apr 12, 2017
abujagirl
A
P
World Obama in Cuba as First US President to Visit in Over 80 Years