Oba Aladetoyinbo Aladelusi, the Deji of Akure, has banned the title of ‘Eze Ndi Igbo’ in Akureland and ordered it to be reviewed and replaced with a non-controversial honorary title.

This is one of the conditions given by the monarch to end the crisis between him and the leader of the Igbo community in the town, Mr. Gregory Iloehike and ordered him to write a letter of apology to the monarch and the Deji-in-Council which should also be published in at least three national dailies as well as broadcast stations. 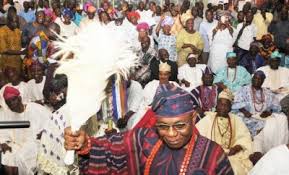 The state Governor, Dr. Olusegun Mimiko, met with the two leaders separately on Tuesday evening at the Governor’s Office, Alagbaka, Akure, and reportedly pleaded with the Akure traditional ruler to forgive the embattled Igbo leader.

M
Metro "Biafra Is A Fraud – It Was In The Mortuary, Now Gone To The Cemetery" - Igbo Monarch - Nairaland