The Speaker and Deputy Speaker of the Edo State House of Assembly have been impeached.

According to Channels Televison, both men were removed on Tuesday.

The Speaker of the House, Honourable Victor Edoror and his Deputy were accused of incompetence and high-handedness. 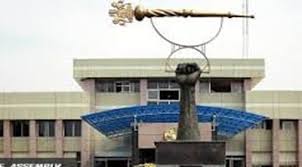 The two principal officers were impeached by 15 members of the parliament.

A new speaker Mrs Elizabeth Ative was immediately elected after their impeachment as replacement.