According to the PUNCH newspaper, a witness at the ongoing inquiry into the Ikorodu brouhaha of July 4 has told the panel that a femal soldier poured petrol on the Bus Rapid Transit vehicles.

It would be recalled that some of the BRT buses were set on fire at Palmgrove Bus Stop on the 4th of July, 2014. The witness, Mr. Razak Mustapha, an employee of Mutual Model Transport Ltd., a LAGBUS sub-operator gave his testimony before rtd. Justice Ebenezer Adebajo.

The July 4th incident was caused by the death of a soldier and lasted about three hours. The tribunal will now investigate the said events of July 4.

Mustapha told the panel that on July 4, he was assigned by his company to tow a BRT vehicle that had broken down at Palmgrove.

According to Mustapha, their mission was to return the vehicle which broke down to the BRT depot.

Mustapha said that while he attempting to start the bus, he discovered a corpse inside the vehicle and immediately informed his colleague.

He told the tribunal that he and his colleague rushed out of the vehicle and made a phone call to his boss, giving an account of what he saw. 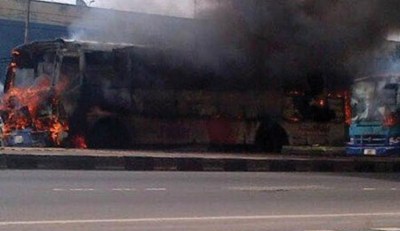 Jul 31, 2022
ese
E
E
Metro No provision for 820 buses in budget I managed, says ex-commissioner on Ambode probe - The Cable