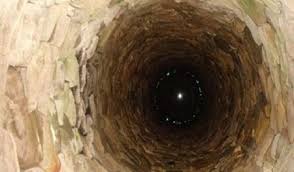 The man was said to have excused his 10 children and his wife from their house before he allegedly jumped into the well at the centre of his compound.

According to vanguard, the middle aged man was last week diagnosed and treated of malaria parasite, and was said to be recuperating fast before the tragic end.

A family source said that the late Haruna has no trace of mental illness, and that the entire family is still at a loss on what informed his decision.

Speaking on the incident, the eldest son to the deceased, Balarabe Mahmud, said the incident occurred at about 2.00pm Saturday when the entire family members were temporarily asked to vacate the compound by his late father to enable him have a rest.

Mahmud disclosed that, “we left our home in strict compliance with his directives to allow my ailing father have complete rest only to return home and discovered he was missing. ”

“We immediately raised a search team only for us to notice strange movement in the Well as we promptly invited men of the Fire service department to the rescue.”

‘’Consequently, the fire service operation that lasted few hours led to the recovery of his corpse from the Well amid tears.’’

Confirming the incident, Director Fire Service in Kano, Mohammad Rilwan, said they got to the scene at about 3pm after his men received emergency call few minutes earlier.

He said the victim was, “rescued dead and delivered to the family after a formal request.”

When contacted, the Police Public Relations Officer DSP Magaji Musa Majia, said the incident has not been reported officially to the police.

C
Metro “Mummy you’re an ashawo. After my father died, I built house for you and you brought a man into the house,” Nigerian man goes “crazy” in Ghana - LIB