The Lagos State Police Command has arrested a diploma holder, Samuel Onochie, for allegedly sexually assaulting a pregnant woman, (name withheld), in Jakande, in the Eti-Osa Local Government Area of the state.

It was learnt that the woman, said to be eight-month-old pregnant, was passing through the area last Sunday at about 6am, when Onochie ambushed her.

The 34-year-old suspect, who told the police that he bagged a diploma in law from a university in Benin, Edo State, reportedly threw Esther on the floor and stripped her wrapper.

PUNCH gathered that he had dipped his finger into Esther’s private parts and was about to penetrate her when a man was drawn to the scene by the woman’s wailing. 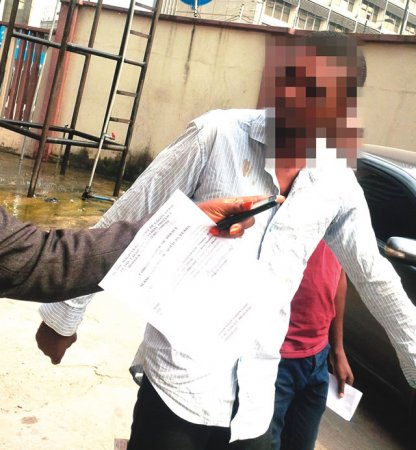 The man was said to have held Onochie, who is also a cobbler, while Esther rushed to the Ilasan Police Division and reported the incident, leading to his arrest.

A police source told our correspondent that the suspect had yet to explain why he allegedly committed the act.

“It is very disturbing that a man could commit such an act, especially with a pregnant woman. As if it was not enough, he did it in broad daylight. He has not been able to tell us why he committed the act,” the source said.

Onochie was brought before a Tinubu Magistrate’s Court on Wednesday on one count of sexual assault by a police prosecutor, Inspector Philip Osijale.

The defendant pleaded not guilty to the charge and elected summary trial before the presiding magistrate, Mr. L.A. Owolabi.

Owolabi granted him bail in the sum of N100,000 with two sureties in like sum.

The magistrate said one of the sureties must be related by blood to the defendant, adding that both sureties must have paid three years tax to the Lagos State Government.

While adjourning the case till March 14, 2016, Owolabi ordered that the defendant should be remanded in prison pending the time he would perfect his bail conditions.