Curators
A former Governor of Benue State, Gabriel Suswam, has been arrested by the Department of State Services, DSS. 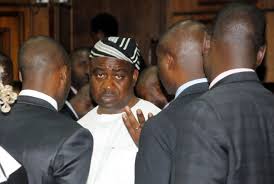 The ex-governor was arrested over items recovered inside in a building in Abuja, reportedly belonging to him.

Other items recovered include:
i. Twenty-one (21) Certificates of Occupancy (C of O) and one (1) Offer of Statutory Right of Occupancy;
ii. Twenty-three (23) Luxury designer watches; and
iii. Forty-five (45) keys to various exotic cars.
P

No biggie..especially the luxury items, he was a former governor. Some civil servants have more than those

If he has licenses to the ammunition, then there is no cause for alarm.