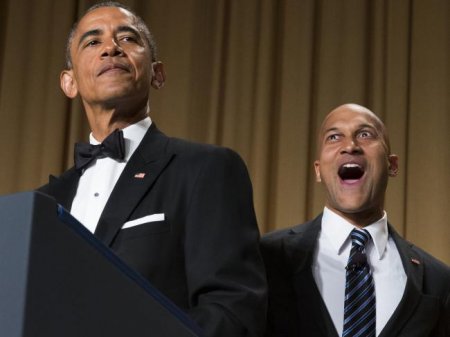 U.S. President Barack Obama added "comedian" to his resume for a final time on Saturday (April 30) as he drew big laughs in his last appearance at the annual White House correspondents' dinner, a night of playful ribbing of both politicians and the news media.

"You know I'm going to talk about Trump!" he cried, referring to the Republican presidential front-runner. "I'm a little hurt he's not here. We had so much fun the last time. And it is surprising, You've got a room full of reporters, celebrities, cameras, and he says no," Obama joked.

"Is this dinner too tacky for 'The Donald?'"

The president also gave a shout-out to Democratic presidential candidate Bernie Sanders, who was in the audience. The black-tie event, which Obama has previously joked is "a night when Washington celebrates itself," brings together journalists and media moguls with Hollywood stars and power brokers from Capitol Hill and beyond.

World Obama, Trump fight on twitter over who should take credit for US economy – Ladun Liadi’s Blog