The Kaduna State Sector Command of the Federal Road Safety Corps (FRSC), on Tuesday, attributed the accident that claimed the lives of six Ekiti State medical doctors to over speeding. 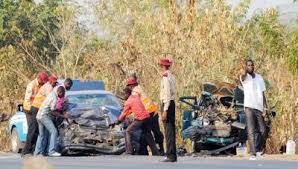 The Sector Head of Operations, Deputy Corps Commander, Salisu Galadunci stated this in an interview with the News Agency of Nigeria (NAN) in Kaduna.

NAN reports that the accident occurred on Sunday at Doka, along Abuja –Kaduna road.

“Twelve medical doctors and a driver were in an 18-seater bus travelling to Sokoto for Nigeria Medical Association (NMA)’s annual conference and had a tyre bust due to over speeding.

“The vehicle overturned with the occupants and six of the doctors died along with the driver while six others survived with various degrees of injuries. “Bodies of the victim were evacuated to St. Gerard Hospital for depositing and medical attention”.

Galadunci noted that over speeding was responsible for a larger percentage of accidents on Nigerian roads.

Meanwhile, one of the survivors, the Ekiti state NMA’s branch Chairman, Dr John Akinbote, has blamed the death of the doctors on lack of immediate medical attention.

Akinbote made the claim while speaking with journalists on his hospital bed on Monday at St. Gerard Hospital, where other surviving doctors are currently receiving treatment.

He said: “Those that died would have survived if we got good medical attention from the point of the accident to the Doka General Hospital in Kaduna.

“It became even worst, when we got to Doka Hospital and there was no single doctor to attend to us and the only nurse on duty had no first aid facilities to administer treatment.

“I am sure, if FRSC personnel that took us to Doka Hospital and the nurse on duty had medical facilities to give first aid treatment, our doctors and driver wouldn’t have died.”