Politics Prof. Sagay Reveals Why FG Did Not Name Looters

Chairman, Presidential Advisory Committee Against Corruption, Prof. Itse Sagay has hinted that there was no legal impediment in shaming alleged thieves. 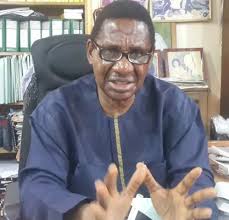 The renowned legal practitioner added that the decision not to name looters was more political than legal.

He stated that the decision not to name looters was made in a bid to encourage others, who had stolen, to return money.

Sagay said, “The way I see it, it is more political than legal. It is not party politics but about conduct. I believe the government feels that if you name names, those who are about to come out and also bring out whatever has been looted, would withdraw.

“On the legal side, I don’t see the problem that is being talked about because once a person is going to be charged to court for corruption or illegally acquiring resources, there is no liability in announcing it.

“After all, we have been seeing the names of all those accused and charged. So, the main reason is to encourage others, who are still hiding their loot and speculating what to do, to come out and hand over the loot so that the country can recover more of what has been stolen.”

Some of those who fall under this category, he explained, were newspapers who received money from the Office of the National Security Adviser but later returned the funds.