The Golden Eaglets have progressed to the the semi-final stage of the U17 World Cup in Chile following their 3-0 thrashing os the Celesao of Brazil on Sunday night.

Three goals in five minutes in the first half of the game sealed the deal for the Emmanuel Amunike boys, who was an assistant coach in 2013 when Nigeria won the last edition of the tournament at the United Arab Emirate.

The defending champions, who are still on course on their title defence will face the winner of the quarterfinal game between Mexico and Ecuador slated for Monday night.

Brazil ended the game with more possession as they created many chances which the Nigerian keeper stopped in his own goal post before Osimhen opened scoring for Nigeria after 29 minutes for his eighth goal of the tournament.

Kingsley Michael doubled the lead in the 30th minute off a delivery by Osimhen, before Udochukwu Anumudu made it 3-0 in the 34th minute

This makes it twice that Nigeria has defeated Brazil, first at a four nation invitational tournament in Suwon, South Korea, recently Nigeria won 2-1 and second, was the 3-0 mauling of the South American team on Sunday.

Meanwhile, Mali have also made it through to the semi finals of the tournament after edging Croatia out by just one goal after 90 minutes.
The Croatians are the only team who have beaten Nigeria so far in this edition of the FIFA U17 tournament. 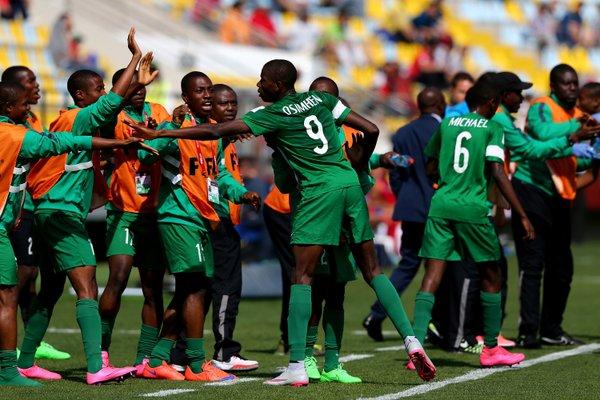