Kadiri Ikhana has blasted the management of Enyimba football club for not renewing his contract at the end of the league season which ended mid November.

Ikhana, who led the Aba Elephants to their first CAF Champions league title said he wasn't surprise at the news, saying he challenged some of the senior board members which, in his own opinion birthed his sack.

The 63 year old, who led Enyimba to a CAF Champions League title in 2003 returned to the side and helped the club secure a record 7th League title last season, after winning the FA Cup in his first season.

Ikhana said: "I have been expecting this for sometime now, and am not too surprised because I had a run in with some of the senior board members. I won the Federation Cup and finished in second place 2 seasons ago and won the League last season so what more do they need me to do?" Footballlive 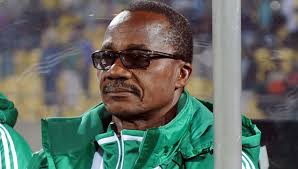 Feb 1, 2016
Babalola Oluwatomiwa
B
B
Sports Ikhana Confident Enyimba Will Be Champions Despite Rangers Loss