A 30-year old man named Olaniyan Oluwakayode has been arrested for raping a 20-year old girl. The man allegedly raped the woman, took her photos and uploaded them onto the internet.

The victim (name withheld) from Akwa Ibom State, alleged that after being raped, Oluwakayode snapped her pictures despite pleas from his sister to desist from such barbaric act, saying Oluwakayode was never her boyfriend as he claimed.

“He stops me anytime I am going to work. He approached me and I told him I was not ready to give him a reply. I did not go to his house. On my way back from work on Tuesday last week, I saw someone running out of his house, because there is a bush around their compound so he jumped from the fence down and held my hand and said he wants to do what’s on his mind.

“So I asked him why would he do what’s on his mind when I have not even accepted his advances, he said he would do what is on his mind today; so he dragged me into the bush. When I wanted to shout, he brought out a knife and said if I shouted, he would kill me there.

“So from the bush, he dragged me to his house and locked the door. I tried all I could to open it but I couldn’t because the door is an iron door and very strong. He used his legs to hold my neck, he tore my skirt, my pant and my bra. He beat me very well on my head, neck and body and removed my pant and he slept with me. After he finished sleeping with me, I couldn’t shout again because he was beating me and forcing me to open my legs. When I refused, he also held my neck so I couldn’t shout,” she alleged. 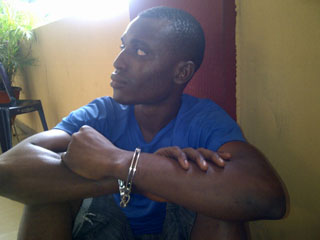 E
Entertainment I Am LAYCON now showing on Showmax