Curators
The Nigerian U23 national team have emerged the champions at the just concluded African U23 nations cup in Senegal. 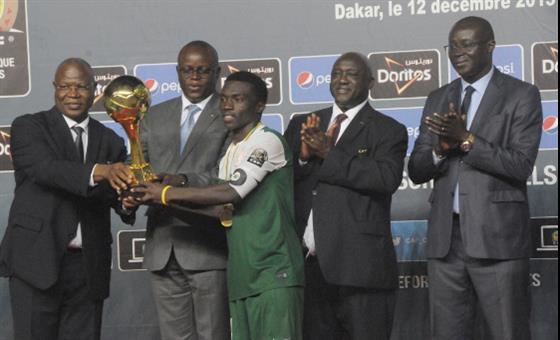 Two goals from Oghenekaro Etebo gave the Samson Siasia led team the victory over their Algerian counterpart, in a game which ended 2-1 at the final whistle on Saturday at the Leopold Sedar Senghor Stadium, Dakar.

Nigeria scored all three goals in the game following an own-goal by Oduduwa Segun in between secured the Dream Team the title at the expense of Algeria.

Victor Osimhen, who got his only start of the championship at the final of the tournament had fired a shot at the Algerian goalkeeper in the 18 yard box, but his shot went a little wide outside of goal.

And then, the Warri Wolves middle man gave a solo run from the midfield into the box of Algeria, before he was brought down in the box and eventually converted Nigeria's first goal from the penalty spot to give Nigeria an early lead in the game.

‘Les Fennecs’ had the luxury of wasting a penalty late in the second half with Nigeria goalie Emmanuel Daniel stopping Zinedine Ferhat’s lousy kick.

‘Les Fennecs’ quest for the equalizer yielded dividends on the hour mark when hard-pressed Oduduwa headed home a cross from the right by Ferhat into his own net.

Five minutes before the break, Oghenekaro restored his side’s lead with a cool finish past Salhi, and take his tally to five in the competition.

Striker Abdelhakim Amokrane came close twice to breaking the deadlock in the opening minutes of the second half heading wide on both occasions.

On 68 minutes, Algeria were rewarded a penalty after Ndifreke Effiong fouled Amokrane in the vital area, but Nigeria goalie Daniel made light work of Ferhat’s shot from the short distance with a calm save.

Nigeria held on to claim victory to cap an impressive outing at the tournament which served as the continental qualifier for the 2016 Rio Olympic Games.