Human rights lawyer, Femi Falana, has requested the International Criminal Court to “investigate allegations of crimes against humanity committed against the Nigerian people by top government officials in criminal diversion of $8 billion earmarked to procure equipment for the armed forces to fight insurgency.”

In a petition obtained by Premium Times, dated January 19, 2016 and sent to the Prosecutor of the ICC, Fatou Bensouda, Mr. Falana said, “We are a firm of civil rights lawyers based in Lagos, Nigeria. We are the defence counsel for the majority of the members of the Armed Forces of the Republic of Nigeria who were charged with mutiny, cowardly behaviour and sundry offences before the courts-martial instituted by the former military authorities.

The petition reads in part: “On account of the deliberate refusal of the former military authorities to equip and motivate the members of the armed forces involved in combat operations the insurgents have killed about 25,000 soldiers and civilians including children and displaced over 2,000,000 people. Having compromised the security of the people of Nigeria by collaborating with the terrorists the former military authorities deliberately encouraged the brutal killing of innocent people including ill-equipped officers and soldiers.”

“During a visit to Borno state in 2014, former President Jonathan revealed to some selected leaders of the community that it was when Alhaji Modu Ali Sheriff caused the extra judicial killing of the leader of the Boko Haram sect, Mohammed Yusuf that the group declared war on the Nigerian people. Even though President Jonathan knew that Alhaji Sheriff was a major sponsor of the terrorist group the government did not charge him to court under the Terrorism Act applicable in Nigeria.” 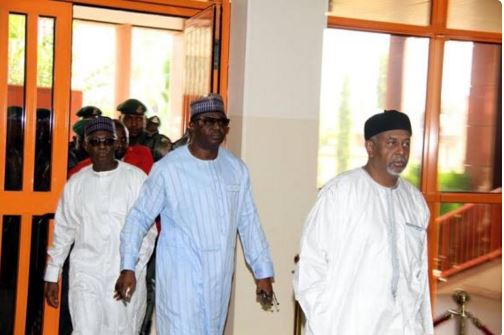 “In order to divert the attention of the Nigerian people and the international community from the afore mentioned crimes against humanity, scores of soldiers were put on trial before courts-martial for demanding for equipment to fight the well-armed members of the Boko Haram sect. The military courts convicted the soldiers and sentenced them to various terms of imprisonment while 70 were sentenced to death. Over 3,000 others were dismissed from the Nigerian Army in similar circumstances.”

“Having investigated and confirmed that the said soldiers were sacrificed to cover up the criminal negligence of the former military authorities the current Army leadership has ordered the recall and reinstatement of the 3,000 dismissed soldiers and commuted the death sentence of 66 out of 70 convicts on death row to 10 years’ imprisonment.”

“The inquiry conducted by the Presidential Panel on arms procurement has established that the bulk of the sum of $2.1 billion and N643 billion ($4 billion) earmarked for the purchase of military hardware to fight terrorism was criminally diverted by the former government through the office of the National Security Adviser, Col. Sambo Dasuki (rtd). It has also been confirmed that the said Col. Dasuki colluded with some serving and retired military officers and civilians to divert the sum of $2 billion and N29 billion set aside for the procurement of fighter jets and other equipment for the Nigeria Air Force.”

Falana then asked the ICC Prosecutor to urgently commence an investigation proprio motu on the allegations of the criminal diversion of the security fund of $2.1 billion and N643 billion earmarked by suspected perpetrators, with a view to determining whether these amount to crimes against humanity within the Court’s jurisdiction.

Falana is the only MAN living right now. The rest are just existing!

The call by falana has been long overdue.
Justice delayed isn't justice denied.

Let us see how this goes..