Sports Odion Ighalo Wants To Cause Upset Against Arsenal

Curators
Odion Ighalo has admitted that Arsenal are a great team but believes his side are more than capable of causing an upset when the English Premier League games return to centre stage after the FIFA international break.

The Nigerian international, who has five EPL goals this season hopes to score for his side but most importantly, help Watford beat Arsenal on Saturday.

"Our target is to try and play good football, defend well and take any opportunities that come our way to score goals. My target is to help my team play well and score goals," Ighalo told AfricanFootball.com

“Arsenal are doing well at the moment, so it won’t be easy, but we hope for the three points.

"Yes we are ready to go, it’s not going to be easy for us. Arsenal play the best football in England but we are going to try and do something in the game.”

The former Udinese forward said his preparation ahead of the game against ‘The Gunners’ is not special.

"Nothing special or different in the way I am preparing for the game, it's the same way have been getting ready for all my games, but I am sure the coach has his tactics for the game," he said. Africanfootball 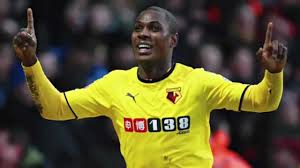