Philip Effiong, a general of the Biafran Armed Forces looks on as the General Officer Commanding the 3 Commando Division of the Nigerian Army, Colonel Olusegun Obasanjo, initials a paper of Biafran Surrender in the Field on the 13th of January, 1970, after Effiong’s broadcast of the ‘Biafran Surrender’ on 12 January, 1970.

The leader of the rebellion, Odumegwu Ojukwu fled Nigeria for Abidjan, Ivory Coast leaving Effiong to do the surrendering and ultimate capitulation of Biafra to the Nigerian Armed Forces. 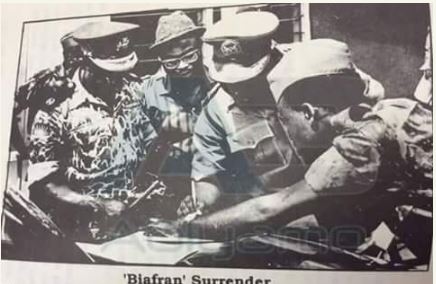 K
Metro Throwback: PHOTO of Ojukwu as He Declares Biafra Independence in 1967

A
Metro Biafrans, Hear the Voices Of Reason and Wisdom - Dele Momodu

May 30, 2017
abujagirl
A
A
Metro Biafra, Buhari and The Easter Day Rising by Femi Fani-Kayode