I recall then Lagos state Governor, Mr. Babatunde Fashola, a silk like you hailed your nomination as Vice Presidential candidate in 2014 as a good omen for “the rule of law, federalism and constitutionalism in Nigeria”. He based his optimism on your antecedents especially for being “the brain behind the transformation of the Lagos State judiciary.” 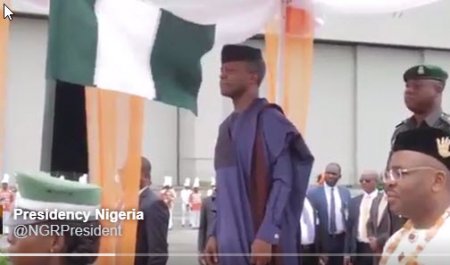 Vice President Yemi Osinbajo He said further while addressing a gathering of judges, lawyers, traditional rulers and religious leaders that: “Professor Osinbajo has made tremendous contribution in the state’s judiciary. He has started his own journey as well because the vision of building an efficient and incorruptible judiciary started under his watch as the Attorney General of Lagos State. So, I wish my brother and friend, Professor Yemi Osinbajo the very best in the journey.”

The then Attorney General of the state and now one of your aides, Mr. Ade Ipaye speaking after Fashola was more effusive as he said you were “by far the most impactful contributor to improvements seen in the Nigerian Justice sector since the end of military rule in 1999.

During his tenure, the idea of bringing justice to the people became entrenched, particularly with the establishment of an Office of the Public Defender and a Citizens Mediation Centre.

Both agencies have since benefited millions of Nigerians directly or indirectly by way of free legal services, free representation in court and free mediation services,” He further noted that as Commissioner for Justice, you ensured strict adherence to the rule of law while in the service of the Lagos State government, saying that: “As an advocate, Prof. Osinbajo participated actively in all important cases during his tenur, especially the constitutional cases in the Supreme Court, showing himself as an astute lawyer and a passionate defender of federalism and Constitutionalism”.

You raised the hope that you would live up to this rating while receiving the leadership of the National Union of Road Transport Workers Union, NURTW in your office in July 2015 and you said that ensuring no one is above the law is the rule in any developed country. You were unequivocal when you declared : “We insist that the rule of law be maintained, that no one is above the law. It is the first rule. The President has committed himself to this.

He said it yesterday again in the U.S that nobody is above the law”. Those words of yours must haunt you today as it would appear that the pull of office has set you against your self and core beliefs. Our fathers from the depth of their wisdom must have had this situation in mind when they said that a sheep that keeps the company of dogs would have excreta for lunch. You started by demolishing your federalist credential by opposing the restructuring concept.

You shattered your apostle of constitutionalism rating with your role in the Magu Saga when you turned the constitution upside down for expediency. You have now completed the cycle by dancing on the rule of law.

As I watched you looking apparently forlorn as prayer points were being raised for Nigeria in crises at the February Holy Ghost Service at the Redeemed Christian Church of God, I remember that Lady Evangelist of the church who was hacked to death under your nose in Abuja and you could not find just a word to condemn the killing how much more ensure the killers were brought to book.

As the killings intensify in the land, we have yet to hear you speak clearly on the side of law enforcement. Rather, we hear empty platitudes like the one you made on politicisation of killings during an interdenominational service in Abuja on January 7,2018:

“Again, we have seen some today who want to benefit politically. The killing of women and children in Adamawa, Benue, Jos and several other places, stoking the embers of ethnicity and religion.

“By their hate speeches, they want to fix the criminal acts of a few individuals on the whole tribe and a whole people and will want to create religious crisis if we allow.

“Our obligation is to stop them from playing dangerous politics that could threaten our unity and stability, just as we continue to enforce the peace in the troubled area.”

Harsh words against killers? None! As if for complete disintegration, you now head a diversionary and contemptuous shadow-chasing committee instead of enforcing the laws against ‘sacred cows’ who are killing fellow citizens under the guise of the right of their cows to graze on any space in Nigeria.

Your panel has now set up a sub-committee to go and appease the Meyitti Allah who have owned up to the killings and threatening more deaths if the anti-open grazing law is not repealed. It seems you now have good company in the Defense Minister and the Inspector General of Police who have now become what Governor Ortom rightly describe as “spokesperson for killer herdsmen”.

Sadly ,your pedigree is being assaulted by this new role trusted upon you. It is grieving how otherwise solid men allow temporary power to destroy their future because they pay little heed to the fact that there is life after office. What will you teach in a Criminal Law class tomorrow?

That when crimes are committed,appeasement takes the place of punishment if the culprits belong to special interest ?Are you going to tear the page that says “thou shall not kill” from your Bible?What will you tell your Sunday School students on the sanctity of human life?

My dear Vice President, you come from a land that has produced men who would not allow the perks of office to dull their conscience and the values they hold dear.

The grandfather of your wife in a moving tribute to the late Ooni of Ife,Oba Adesoji Aderemi recalled his gallantry and the Alake during his tenure thus : He was a frontline nationalist. If he had not been Oba, he would, in my judgement, have occupied a position of leadership in the affairs of the country as from the late thirties such as some of us have occupied since the early fifties.

The progress of Nigeria towards independence was greatly accelerated by the motion for self-government in 1956 filed by Tony Enahoro in 1953 at the instance of the Action Group of Nigeria. Without the mighty backing of the late Ooni and the late Alake, the motion would not have even reached the Order Paper. Late Sir John Macpherson had left no stone unturned in trying to get Oba Aderemi and Oba Ademola to dissuade us from pursuing the motion. In the alternative, he had urged them to mobilise all Western Region Obas and Chiefs to oppose the move. But the late Ooni and the late Alake immovably stood their ground.

The emancipation of their country was of greater concern to them than any material thing or official honour that could be gained, or any inconvenience that could befall them. When the motion for Independence was killed in the House of Representatives by the NPC’s dilatory tactics, the Action Group and NCNC members walked out of the House. Oba Aderemi and Oba Ademola also walked out with us.

Immediately after the walkout, the Ooni proceeded to the Government House to tender his resignation from the Council of Ministers. And thereafter, throughout the contest unto final victory, the late Oba Aderemi did not waver even for a fleeting moment.

When the big test came that is, when Sir John (Macpherson) tried to divide our ranks by nominating the late Ooni to the Council of Ministers to the exclusion of Bode Thomas and others, the late Oba Aderemi voted against himself with the same determination and defiance as all of us in the Joint Session of the Houses of Chiefs and Assembly did. In the end, thanks to his steadfastness, we had our way.”

Awolowo himself said NO whenever it was necessary. Admiral Akin Aduwo sacrificed his office instead of surrendering University of Ife to the Federal Goverment. Gen. Alani Akinrinade resigned honourably when he was promoted into irrelevance as Chief of Defence Staff under Shagari. Only men of straw say “my hands are tied”.

A real man should know what is beneath him.If we have reached a point where killers are above the laws of Nigeria, a man who made clear commitment to the rule of law like you should not be an accessory after crime by holding talks with those who should be sweating before the law. It is beneath!