Tuta absoluta is a species of moth in family Gelechiidae known by the common names tomato leafminer and South American tomato moth. It is well known as a serious pest of tomato crops in Europe and South America.

The federal government on Tuesday confirmed the six states hit by a pest called the Tomato Leaf Miner or Tuta absoluta, commonly referred to as ‘Tomato Ebola.’

Here are 10 important things Nigerians should know about the ravaging tomato pest:

- The pest (Tuta absoluta) was discovered in South America in 1912 where it ravaged many farms before it spread to Europe and then to Asia and now to East and West Africa.

- According to the Minister of Agriculture, Audu Ogbeh, the pest came into the country from Niger Republic and manifests a powerful infestation that could make it impossible for the country to grow tomatoes, if not dealt with.

- Federal government has engaged experts to find solution to the spread of “Tomato Ebola,” a pest currently ravaging tomato farms in the country 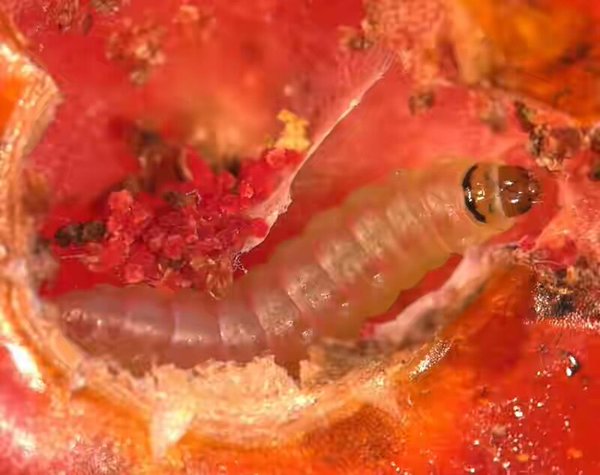 - Federal Government has confirmed that the pest has attacked six states

- Ordinary pesticides cannot deal with this `tuta absoluta’ because it has a way of multiplying so fast. It produces almost 250 offspring per cycle

- The pest can also attack even pepper and Irish potato

- The tomato shortage caused by the outbreak has caused prices to go up “astronomically”, a wholesale basket containing hundreds of tomatoes now sells for 42,000 naira ($212, 186 euros), up from 300 to 1,500 naira before the outbreak.

Common signs and symptoms of Tuta absoluta on fruit and stems include:

Business Nigerian To Ban Tomato Paste Import Before the end of 2019 – Minister – NaijaBizCom.Com